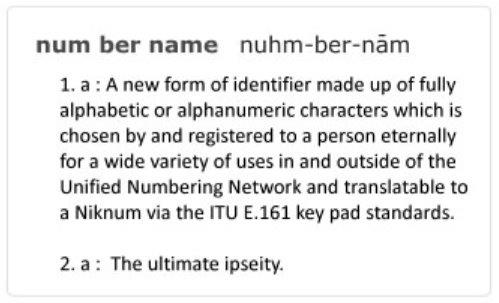 People aren’t usually allowed to choose their most important identifiers (ie; given names, govt issued IDs, important acct numbers etc). This is one of the reasons why registering a Numbername is an interesting, fun & liberating event.

Also, every Numbername is unique and permanently registered to its holder for life so the process of creating one is very worthwhile and meaningful.

There are 5 classes of United IDs which identify Individual People, Groups of Individuals, Organizations, Animals and Objects. For now we’re talking about the ones for Individuals which are referred to as “United IDs”, they come in three flavors. Everyone starts with a Personal Unified Number or “PUN” which are free and disposable. They link to Alphanumeric or Alphabetic Numbernames.

PUNs are all 16 digits in length and randomly generated and regenerated at one’s request. The disposability comes in handy for several exciting uses which will be revealed soon. An example of a personal PUN is; 1001-32-296-741-9339. About the first trillion will start with “1001” which will likely take us through a millennia so, there’s plenty of PUNs to go around.

Everyone starts out with and will always have a PUN. But the preferred, easily memorable alternate of PUNs are Numbernames which are available via paid registration. (The sole source of funding for the Unified Numbering Project) They can be either fully alphabetic with no numbers, or alphanumeric, a combination of letters and numbers (w/out 1s or 0s).

The translation is done on any keypad which conforms to the standards set forth by the international keypad design for phones (ITU E.161) It’s been adopted by the majority of telecommunications industries and phone manufacturers worldwide.
(ie; #2 = ABC, #3 = DEF, #4 = GHI, etc)

In societies where the ITU standard has not been adopted there may be alternate manners for people to make the translation of their Numbernames to Niknums. This decision will be made in phase IV. Regardless, each version of Numbernames (alphabetic and alphanumeric) are split into 4 common classes based on the length of the Niknum produced. In most of the world that length will be identical to the amount of alphabetic characters in the Numbernames which are;

There are also two other classes of Numbernames which are premiums (7-8 character “Extra Short” and 4 – 5 – 6 character “Ultra Short”) A total of just 5,000 of these will be released as a form of thanks for the Projects first contributors during a special prelaunch campaign to raise funds for Phase III. After that no more will be available until users decide otherwise at a later date via voting.

Discussions regarding longer and shorter classes will also go into deliberation with emphasis on the most logical uses for 1 – 3 digit blocks in the future. There’s less than 40,000 of these Super Shorts for eternity so we’ll want to use them wisely. Users will vote on this and other subjects at a later date during phase IV.

Examples of Personal Unified Numbering Using United IDs in the Forms of a PUN, a Numbername and a Niknum:

Numbernames are obtained by paid registration on line at any Personal Unified Numbering Registrar or via purchase or gifting from any existing user who is able and wants to provide them. All such provisions are made with special credits called Numberbucks, the Unified Numbering Projects own form of money. Numberbucks are attained in 4 ways;

Numbernames are obviously much more memorable than PUNs. And since they can be easily translated into numbers they’ll get used a lot in the real world. As mentioned above, the method of translation of Numbernames to Niknums may vary but the resulting Niknums produced will be uniform around the globe.

By this method it’s conceivable that one may never need to know, store or remember their friends’ and family members’ phone number/s, address/es, email address/es or anything other than their Numbernames. And knowing someones Numbername will be far more useful than knowing their real names since with it, you’ll always have access to their contact info. And their all in one contact number (their Niknum) will be available at all times.

This provides the ability to call, email, fax, write or ship things to people using just one number from memory anytime from anywhere via the web, phone or any social networking platform in the future. It’s a simple and highly effective manner of identifying each other.

Due to the fact that 3 alphabetic characters are used for each numerical digit in the translation process from Numbernames to Niknums, the availability of Numbernames becomes fairly limited. (ie; the numeral “1 “ equals A, B & C on touch pads).

For example, the shortest common Numbernames are currently 9 characters in length which would be 100 million unique numbers but only 33.3 million unique letters from the English alphabet (the current standard for all Numbernames, more later).

And since not every letter can just go anywhere to spell a word, there’s much further limitation. Also, Personal Numbernames are only assigned one time to one person for eternity and they’re available to everyone around the world.

The point being made here is that if any specific Numbername is desired and available, it’s wise to reserve it. This is especially important for shorter classes which is why they cost significantly more to register.

With a little use and memorization good Numbernames become as easy, if not easier to remember than given names. The other benefit is the fact that there will only be one “MikeyLikesIt” ever, whereas there are millions of Mikes in the world and presumably, billions more to come.

So, someday when you find yourself in Timbuck Two without your contact file, you’ll be able to just grab any phone to connect to the network and enter “MikeyLikesIt” on the keypad whenever you’d like to get in touch with Mike. Even if Mike moved or changed his phone number, there’s no worries, you’ll still get through (so long as he wants you too).

Also as mentioned above, offering Numbername registrations is the sole means by which Unified Numbering is capitalized. And since shorter ones cost more those who buy them add major benefits to everyone and the project. Selling Numbernames is also the basis of an awesome opportunity for scores of individuals seeking fun, rewarding and lucrative careers with Unified Numbering.

We all win by inviting everyday people to take part in the business of supplying Numbernames. They help by spreading the word and educating others about Unified Numbering while providing an excellent service of verifying the identities of new users.

Registering through these individuals or at any Certified Unified Numbering Registrar is quick, easy and affordable with a one time registration for a lifetime of ownership. Although many will begin with free PUNs, Numbernames and their Niknum translations are preferred due to the following facts:

• Unlike PUNs which are automatically generated, Numbernames are chosen and therefore more catchy or applicable and memorable. They’re chosen names instead of random numbers.

• Numbernames are more easily conveyed, memorized and recalled than PUNs. People are able to remember each other’s Numbernames far easier than phone numbers, physical addresses, email addresses etc. This means they’ll always have the ability to stay in touch w/each other, forever without having to store anything outside of their minds to remain in touch with those most important to them.

• Numbernames are available in shorter lengths than PUNs which makes them easier to use.

• PUNs are generally an indicator that the holder is either not 18, doesn’t have a credit card or is still working on getting a Numbername.

Although everyone will start with a PUN, they will want to secure a more personally recognizable Numbername of their choosing to use for the rest of their lives. Regardless of which type of Unified Number anyone has, finally, each individual can be an individual in the most elemental way. By having a unique identity that no other, ever will. Everyone can have their own, personal, key identifier which will be theirs forever, never to be duplicated or used by another within a universal network.

And simply having a Unified Number will make connecting to billions of other people on the planet possible in the best way. For the first time in history, people of all classes, ages, races, religions and locations will have a unifying network to perform important transactions and communications related to the world and our future. And everyone can do so safely, with whatever amount of anonymity they desire.

It all starts at Numbername.com which is user central for accessing all Unified Numbering Services. Users go to Numbername to log in, then one click takes you wherever you want to go without the need for other log ins. By having just one site with a dashboard for logging in to all others, we stand to significantly simplify our lives as Unified Numbering grows into other sectors.