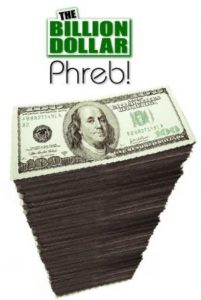 Most would agree the Unified Numbering Project is pretty unique and a real shot at doing something big. So, it needed a significant event to mark it’s beginning.

Something noteworthy that rewards the pioneering, free thinking individuals who pony up to help the cause in being part of this exciting new network.

Hence the Billion Dollar Freebie, the promotional giveaway to top em all. Even after hearing the word “billions” a thousand times during the big financial meltdown of late, it’s still a crazy bunch of money.

Getting ones head around all the big numbers being thrown around these days is an interesting challenge so, lets have a little fun with it;

• A Stack of a Billion One Dollar Bills would measure about 63 miles high or, if laid end to end, 95,000 miles long which would go around the earth almost 4 times.

That’s how much is being given away in free credits (money), upgrades, products and services right now! UPDATE!!! The Billion Dollar Phreb is Now the SIX Billion Dollar Phreb! The little guy’s getting a fair shot in this game, contributions of $1 to $100 will be multiplied by 10,000x thereby creating $250,000 to $1,000,000 in credits! So, 5krs who contribute a hundred bucks become instant millionaires! Further contributions of $1 to $10,000 will be multiplied by 1,000.

Does all this sound crazy? Maybe you’ll recall that $3.3 Trillion Donald Rumsfield “lost” or the fact that the FED gave the CIA its’ own printing press!!! We’re only talking about a measly 6 billion and it’s for an excellent cause, building Unified Numbering! And besides, our new banking system has One Quadrillion units called “NUMBERCOINS” (ie; dollars) from “OutBank” which is already built into the Unified Numbering Networks’ database. Some day soon, we’ll be creating a charter to make it a real bank, the peoples’ world bank! 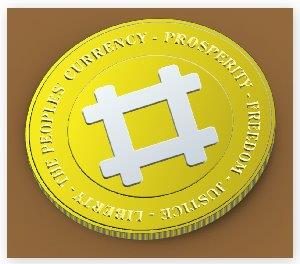 EVER HEARD OF “BITCOIN”? HERE’S OUR VERSION, IT’S CALLED “NUMBERCOIN”! 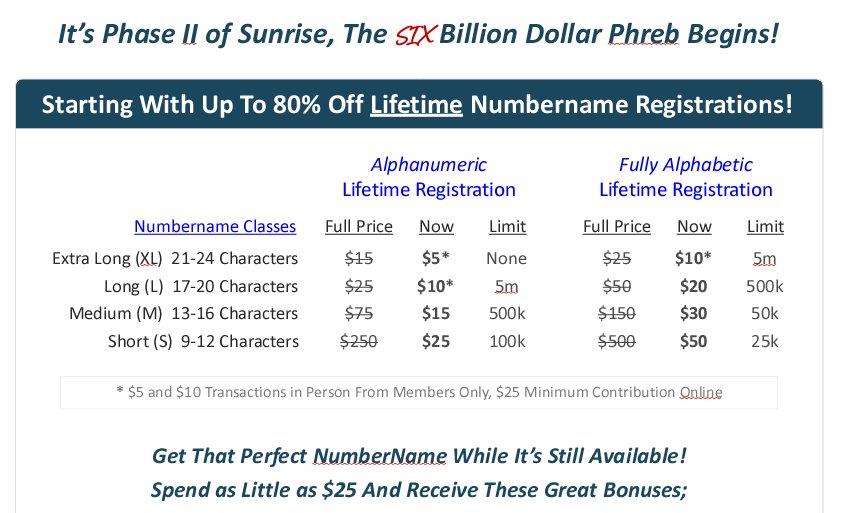 Get That Perfect NumberName While It’s Still Available!
Spend as Little as $25 And Receive These Great Bonuses;

A Top Quality T-Shirt and Priority Shipping w/Tracking to Your Door, Absolutely Free! Choose From 3 Colors/Designs in Both Mens & Ladies Styles. (Continental US, Limited Time Only)

Free Identity Verification! Enjoy a Lifetime of Upgraded Authority, Access, Voting & Other Special Opportunities in the world of Unified Numbering. It only takes a few clicks, and you’re set for life!

Double your Impact! Whatever you contribute to the Unified Numbering Project will be matched and put in the NumberTrust for helping those who can’t afford a Numbername get theirs by referring others.

“5Ker” Registrations
(These Benefits are Only Available to the First 5,000 Users)

If you’re reading this it’s because you can be a “5ker” one of the first 5,000 people to see and support Unified Numbering! The minimum contribution on line for everyday folks is $25 while public officials must contribute a minimum of $1,000 US. Regardless of how much you contribute as a 5Ker you’ll be receiving everything above plus a few extras:

• Your free T-shirt will be a special “5Ker” edition of limited production.

• This next part is going to sound crazy until you realize it’s not! What we’re doing here is creating our own digital currency. The more paper currency we convert to digital, the more value it will have. Anyone who’s read the Everything Pages knows the worlds’ monetary system is one big scam that’s been used to fleece us of our labors and the world of its resources. The people who create the cash are criminals and it has zero value without our participation and use of it. So, we gotta get off the stuff and use our own and this is how we’re going to give it a shot! All Phase II 5Kers have the opportunity to become the networks’ first MILLIONAIRES for just a $100 contribution! This is our way of rewarding those who invest in Unified Numbering in its early days when it needs it the most. You can gift or sell (transfer) your credits to others starting immediately which means it’s conceivable to recoup in paper currency up to 10,000 times whatever you contributed! The gamble there is which will be worth more in the end, the criminal banking cabals’ money or ours! Now there’s a gamble worth taking and an effort worth supporting!

• The special premium length Extra Short and Ultra Short Numbernames listed below are only available to 5Kers and might never be available again! Users will decide on this via voting in Phase IV which means one thing is sure, only 5,000 people in the entire world will have these special Numbernames during the next few years. So, grab yours and be proud of the part you’re playing in getting this exciting project off the ground! And remember, this is the place to “spend it if you’ve got it!”

How much you contribute has much more meaning beyond getting a special Numbername, it’s the future of the project and everyone who will ever use Unified Numbering that you’re helping. It’s how we’re able to stay clear of outside forces of control from investors. 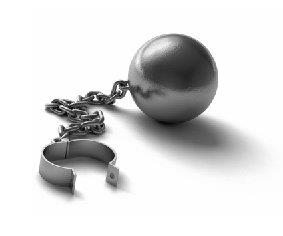