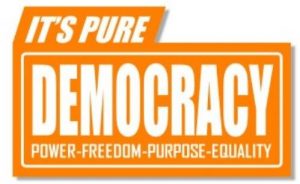 Most democracies of the world are faint reflections of what people think they are. They’re actually plutocracies which are controlled by money. Nowadays cash is king, big media controls everything and the actual will of voters is stifled. Even in the US, 4 presidents and counting have been elected against the popular will of voters. And the number of bills, laws and issues that run against popular opinion number in the thousands. It’s a travesty.

Nearly all the democratic methods we as citizens rely on have been manipulated to serve the rich and the two party political system which in of itself is rigged. Most don’t realize that equal opposition means big advertising profits. A 50/50 split in public opinion is any media moguls dream come true. By keeping everyone at odds, they win big while we the people, lose big.

Candidates for the 2010 midterm elections in the US spent $4 billion in their bids to be elected. And in 2009, US lobbyists bought the affections of our public servants with nearly $3.5 billion. Also, the 08 US presidential elections tallied $5.6 billion. That’s $13.1 Billion in 2 years. For what? Do we ever get better, more qualified representatives? The truth is that when money has anything to do with elections or voting of any kind, there’s something very wrong. You can be sure that greed, corruption and many bad things are happening, there’s no getting around it.

Numbervote is different. It’s based on an interesting application being built around Unified Numberings highly secure and anonymous identification methods. Initial uses will span many areas like voting with family members on where to hold your next family reunion via Unified Numberings Social Network called “AKAme” or deciding which corporation to overcome and buy out with network funds from “OutBank”. Users will even vote on who the Officers for this Project are, ongoing. It’s how people like you will control the direction of this company, its affairs and the use of its funds, everything really. And there are hopes for many more uses outside of the network. Great hopes.

The bottom line is that Unified Numbering is innately the perfect venue for voting. The identity of users is verified, there’s no room for ulterior motives, everyone has equal say and the reach is global which is exactly what the world needs. Plus, there’s no other game in town. So, there’s a real opportunity here and perfecting Numbervote will really pay off. If we do our homework, it will be used for all kinds of things outside of the Project, maybe some really important things that effect everyone.