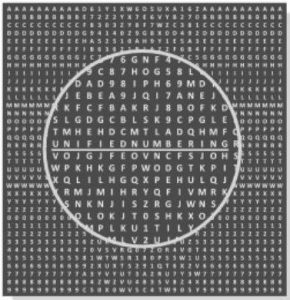 As previously eluded, Unified Numbering is actually just the starting point of a much larger endeavor. But even its most basic uses are colossal breakthroughs with thousands of exciting applications and amazing new prospects. There’s just nothing small about it.

In a world where people are commonly branded or associated with 100s or even 1,000s of various IDs, numbers, user names, addresses etc over the course of their lives, something like Unified Numbering simply had to come along. And here it is. One identifier or “United ID” (hence “Unidigi”) for absolutely everything people do both on and off line while going about living their lives. Every type of communication, transaction and organizational methodology known to man will be covered by just one number, or name instead of those 100s or 1,000s.

It’s a system designed to be used by everyone, everywhere for everything which is a whole lot of people, places and stuff. Anything of such breadth is obviously a big deal and there’s a lot of important considerations to be made over implementation, safety, privacy, security and ultimately, control.

So, who should control such a monumental operation with great societal impact and life altering potential? After considering all of the corrupt governments, leaders and gluttonous corporations we came to a conclusion, the best person for the job is you.

That’s right, you and people like you are going to run this organization and all the business associated with it. It is solely the users who will one day have all say in where this goes and how things are done. It’s important to understand this is why nothing’s written in stone now. It’s hard to tell where people like you will take Unified Numbering.

After all, there’s no limits on the human imagination, spirit or will. We’ve done some amazing things, now its time to do some more. Maybe the best ever. You’re going to love being a part of this very special team of powerful and engaged human beings working for God Almighty!